A rant, if you please:

A wise and caring friend posted this, without comment, on his Facebook page today, crediting it to Occupy Portland: 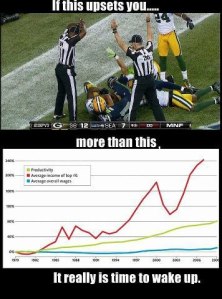 And it wasn’t entirely rational.

In part, I think that it was because just last week, I stumbled upon Seattle’s one-year Anniversary march, and in this politically progressive city, there couldn’t have been more than 100 or so people marching.   Occupy Seattle has all but disappeared in a cloud of disarray and divisiveness.  I think that this football image particularly reminds me too much of the early days of Occupy Seattle when there was so much effort to “organize by scolding” and so much condescension when anyone disagreed with them in the many on-line forums buzzing then.

I remember that on the day after Thanksgiving last year,  the main publicity that Occupy Seattle sought was for their informational picketing of Walmart. They weren’t protesting labor policies or corporate environmental practices.  No, they instead used their laptops and smart phones and digital cameras to organize a trip to Walmart to try to convince poor and working class people to denounce consumerism and not  buy holiday gifts.  Because you know, they knew what’s best for poor and working-class people.

But today’s  image bothered me tremendously because (for the three of you cut off from media, this is the Packers losing a game on disputed call by scab refs on Monday night)  I’m from Wisconsin where children are baptized in Packer costumes and holiday meals are scheduled around  The Game and this was just an incredibly stupid thing to insult the priorities of people on that day of all days.

Because, you know, Packer fans in Wisconsin have also sustained the most grass roots, long-term, systematic effort to restore workers rights and democracy, starting with the days-long thousands- strong occupation of the State Capital (many of the marchers proudly in their Packer jackets),  through the recalls, and continuing through last week’s supreme court decision overturning much of the egregious legislation that had dismantled public unions.  Occupy could learn a boatload about building alliances for social change from the people in Wisconsin, most of whom — without question — were dismayed by that game Monday night.

So I’m bothered by the implication that anyone who was buzzing that day  about the “scab” refs isn’t interested in broader political and economic issues.  I’m bothered that someone with an expensive computer and graphics software to make that image would go anywhere near that argument.

I wonder what my family  would say about that — especially the one who emailed that he couldn’t sleep all night after the terrible ending to that game.  He’s laid off, unable to work because of on-the-job injuries, and has run through all his life savings after doing brutal physical labor most of his adult life.   And he is very very bothered by income and wealth disparities.

For crying out loud:  The whole buzz about the football game and the terrible refs was about  the greed of the wealthy team owners and the busting of organized (but high paid) labor and how that’s now affecting what people’s sense of justice.

Can Occupy not for one minute let go of their disdain for 98% of the population that is not yet behind them and be even a bit strategic about even this, when even ESPN announcers are saying the word “Greed” 50 times an hour?  Is there no strategic way to *align* with people upset that wealthy owners have locked out a union and it’s having real consequences?

I know. I know.  There is no official “Occupy” position. But still.

So there:   Heartbreak over the Packers, and the lost opportunity that was Occupy and the deep classism  that I read into one Facebook image.    All in one rant.

Late to Class: Social Class and Schooling in the New Economy